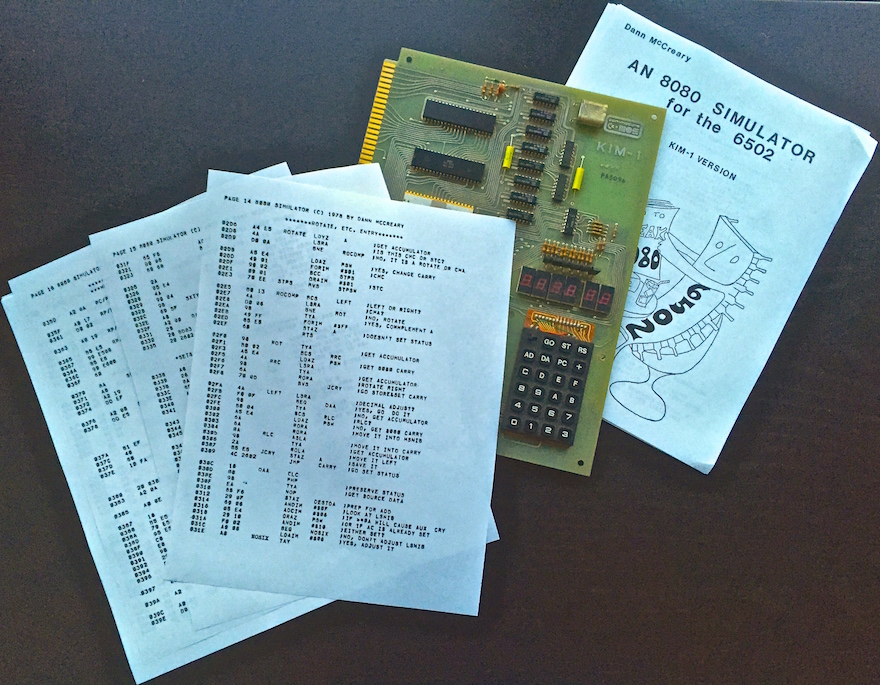 The emulator is extremely size-optimized and fits in less than 1 KB of RAM. This was done by compressing the 256-entry opcode space into 25 sections of similar instructions that could be handled by one generic function.

And here is the original commented source code with usage instructions:

Thanks a lot to Dann McCreary, who provided scans of his original work, as well as additional insights:

I wrote this by hand, pencil and paper assembly (BTW, did you ever read Carl Helmer’s article about pencil and paper in one of the very early issues of BYTE magazine? ;) and much of the simulator was written as I rode the bus to and from work… ;)

About the tools used to create this program:

Honestly, I don’t remember for certain… BUT… MORE THAN LIKELY, it is
a FAKE – i.e., I probably just text-edited a listing in “assembler
listing” format for the purpose of publishing the code and “looking
professional”… ;)

CONSEQUENTLY, be on the lookout for typographical (and thus operational)
errors that could be “in there” …

The all-upper-case makes me think I printed this stuff out on an old
drum printer that I resurrected from the American Surplus Computer
company in Boston back in the ’70s… And there’s yet another story! :)

The text editor may likely have been running on my Apple ][…. or maybe
“borrowed” from some company where I was working at the time?

Dann later ported the simulator to the Apple-][. The tape dump of the resulting product “Apple-80” can be found at brutaldeluxe.fr.