Everything can be expressed in bits. It takes 4 kilobits to decompress ZIP data, 25 kilobits to kill a human, 43 megabits for a working Mac OS X kernel, and 10^120 bits to describe our universe. What is the entropy/complexity of the 6502 CPU, you might wonder? read more

The MOS KIM-1 is a quite rare collector’s item today. So if you hold one in your hands, you better take some high resolution pictures of the board. Here they are: read more 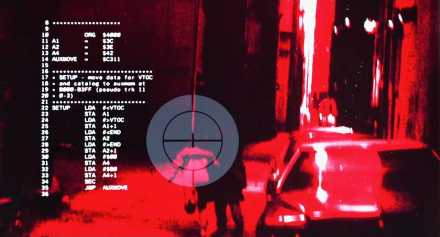 In the first Terminator movie, the audience sees the world from the T-800’s view several times. It is well-known that in two instances, there is 6502 assembly code on the T-800’s HUD, and many sites have analyzed the contents: It’s Apple-II code taken from Nibble Magazine. Here are HD versions of the shots, thanks to Dominik Wagner: read more

I moved cbmbasic development to SourceForge and released version 1.0, which has the following added features: read more I converted the first issue of the German Commodore 64 magazine 64’er into a searchable PDF: read more

Update: The source is available at github.com/mist64/cbmbasic read more

The other day, I found this at WeirdStuff: read more

Update: The source is available at github.com/mist64/msbasic read more

If you disassemble any version of Microsoft BASIC for 6502, you’ll find this code in a function that normalizes the (simulated) floating point accumulator: read more

If you type “WAIT6502,1” into a Commodore PET with BASIC V2 (1979), it will show the string “MICROSOFT!” at the top left corner of the screen. Legend has it Bill Gates himself inserted this easter egg “after he had had an argument with Commodore founder Jack Tramiel”, “just in case Commodore ever tried to claim that the code wasn’t from Microsoft”. read more

The original NMOS version of the MOS 6502, used in computers like the Commodore 64, the Apple II and the Nintendo Entertainment System (NES), is well-known for its illegal opcodes: Out of 256 possible opcodes, 151 are defined by the architecture, but many of the remaining 105 undefined opcodes do useful things. read more

When I disassembled Steve Wozniak’s Apple I BASIC, I found a 6502 trick that I had never seen before, although I had read a lot of 6502 code, including the very well-written Commodore BASIC (i.e. Microsoft BASIC for 6502). read more The audio file that was posted two weeks ago is indeed a very important artifact of computer history: It is a recording of the “Apple I BASIC” cassette tape that came with the Apple I. It is the first piece of Software ever sold by Apple (not counting computer firmware). read more

It probably takes a geek in the front row (which is likely for a concert in San Francisco) to notice that the computer schematics Tool showed on the screens during their âRosetta Stonedâ performance are those of an Apple 1 – but distorted: read more