In the series about the assemblers Commodore used for developing the ROMs of their 8-bit computers, this article covers the 1976 “MOS Resident Assembler” that ran on a variety of 6502-based computers. 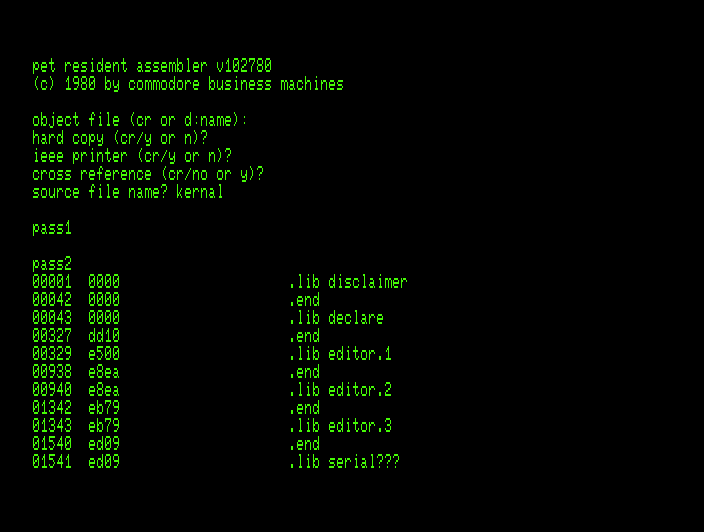 The Resident Assembler was written by Michael Corder (of MOS contractor COMPAS Microsystems) by hand-assembling the Cross-Assembler FORTRAN code to native 6502 assembly.

Consequently, both assemblers were compatible in that they understood the same source format, with the same math features1 and the same directives and options. That way, they defined the basic format supported by all future Commodore assemblers.

This means that the Resident Assembler took uppercase ASCII source files and created ASCII-encoded OBJ output files. It could even create the same LST output, but it was sent to the screen or the printer instead of a file.

The Resident Assembler ran on almost all 8-bit computer systems by MOS and Commodore.

MOS built two computers for demonstration of and development for their new 6502 CPU: the MDT650 and the KIM-1.

According to the manual, the feature list of this version of the Resident Assembler was the same as that of the Cross-Assembler, except:

No ROM dumps are known.

The KIM-1 (1976) was a single-board computer originally intended as a demonstration board for the 6502, but with additional hardware, it could also be used as a full computer. For this, MOS released hardware like the KIM-2/KIM-3 RAM extension and the KIM-4 motherboard.

In 1977, Commodore announced the Resident Assembler for the KIM-1, which was supposed to ship in the form of the KIM-5 ROM board with three 6540 ROM chips (6 KB total) containing the assembler and a simple editor. The same year, they announced that the project was being postponed indefinitely, but it did appear in a price list in 1979. 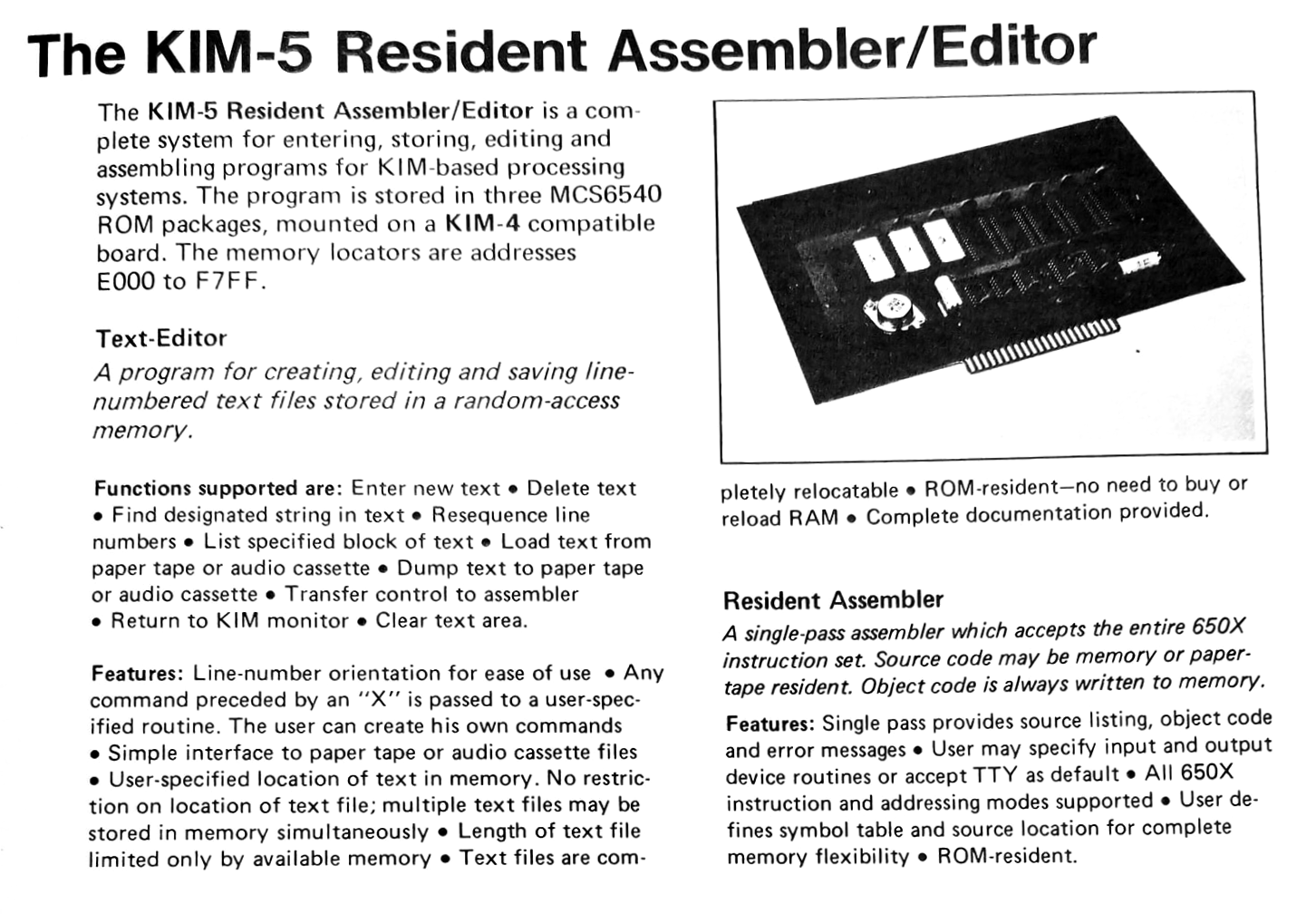 There is a 1977 manual, which does not mention the .DBYTE, .PAGE and .SKIP directives. These were probably just undocumented, since the smaller AIM-65 version (see below) does support them.

The assembler could read source from cassette tape or paper tape, but it could not write OBJ files; instead, it would write the binary to RAM.

No ROM dumps are known.

(A company named “ARESCO” offered a 6 KB RAM-based assembler for the KIM-1 that may have been based on the MOS Resident Assembler. According to the documentation of the Apple II version, the supported directives and error codes matched the MOS Resident Assembler, and some sources call it the “MOS/ARESCO” assembler. Unfortunately, no dumps are known.)

The AIM-65 (“Advanced Interactive Microcomputer”, 1978) was a single-board computer similar to the KIM-1, sold by the 6502 second source Rockwell. A very stripped down and optimized 4 KB version of the MDT650 version of the Resident Assembler was available for this platform.

The AIM-65 is not a MOS/Commodore device, and it was not used internally at Commodore, but its version of the Resident Assembler is presumably based on the (lost) KIM-1 version.

Chapter 5 of the AIM-65 User’s Guide covers the assembler.

After the release of the CBM 2040 disk drive for the PET in 1978, John Feagans (of KERNAL fame) ported the MDT650 version of the Resident Assembler to the new platform.

The oldest known version is undated:

The next known versions are the only ones publicly released:

These two binaries were published as part of the Commodore PET Assembler Development System in 1980.

They add multiplication and division support, as well as textual error messages. So except for the missing cross-reference support, this version basically has feature parity with the MOS Cross-Assembler. The manual is based on the KIM-1 Assembler Manual, and adds descriptions of the OBJ format as well as the added features. Conditional compilation (.IFN/.IFE) is undocumented, but supported by the BASIC 4 version of the assembler.

There are more versions, all of which have only been used only internally:

These two versions are non-mainline:

There is one known version of the Resident Assembler for the C64:

It was released on disk as part of the Commodore 64 Macro Assembler Development System. The manual is based on the PET version, and adds documentation of the macro (see below) and cross-reference features, but does not document conditional compilation. An earlier version of the manual, which is part of the Commodore 64 Development Kit internal document, does document conditional compilation, but not macros.

Commodore also ported the assembler to the TED series, but never released it publicly:

This binary was built from the original source code. Unlike all earlier and later versions, this one does not interactively ask for its arguments, but relies on a BASIC program to place the arguments in memory before calling the machine code.

And finally, there is a C128 version:

It was based on the TED version, but went back to being standalone and asking for the arguments itself.

This version, too, was not released publicly.

While the MDT650 version of the Resident Assembler had no additional features compared to the Cross-Assembler, new features were added to later versions.

The AIM-65 version (and presumably the KIM-1 version) of the Resident Assembler added one new directive:

The size of the source of a more complex program could easily exceed the amount of RAM installed in a KIM-1/AIM-65. For instance, the 4 KB version of the Resident Assembler itself was, without comments, 24 KB in size, much larger than the typical amount of RAM in a KIM-1 or AIM-65.

While the powerful computers that the Cross-Assembler ran on had text editors that could handle files larger than the available RAM, the KIM-1/AIM-65 editors could not do this.

Therefore, the assembler allowed splitting the source into multiple files, which were then concatenated during the build.

Version V112779 of the PET Resident Assembler had the following additional features:

The code guarded by the condition has to be between < and >:

The C64 version adds support for macros. The manual contains the following example:

The argument of .MAC is the name of the macro. The macro contents are defined between .MAC and .MND. Arguments are named ?1 etc., and local variables can be declared from the same namespace.

Also, expressions can contain & (bitwise and), . (bitwise or) and ! (bitwise exclusive or).

The sources of the AIM-65 version, all PET versions as well as the C64 version have been reconstructed from the TED source and are also available in this repository:

The C64 version has at least two known bugs:

It remains to be researched whether the TED source and the C128 binary contain these bugs.

Also, there is a confusing error message:

This means that the assembler was expecting more input, but encountered the end of the line. Back in the mainframe days, lines were also called “cards”, since one punch card stored a single input line.

The Cross-Assembler used to call lines “cards”, as can be seen in the LST headings:

The Resident Assembler had dropped the “card” nomenclature on the PET though:

…except for the single remaining case of the error message.

Commodore used the Resident Assembler on the MDT650 (with an 8″ disk drive) to develop the ROM of the original PET and the CBM 2040 (dual 5.25″) disk drive. At the time, the two MDT650 systems at Commodore were a scarce resource, so as soon as the CBM 2040 drive was available, the Resident Assembler was ported to the PET, and thus 6502 software development was switched to PETs.

The software Commodore built on the PET was:

The next article will discuss the BSO cross-assembler on VAX that Commodore switched to in 1984.