In the series about the assemblers Commodore used for developing the ROMs of their 8-bit computers, this article covers the 1989 “Commodore 6502 Assembler” (6502ASM), a cross-assembler written in C that ran on VAX and PC. 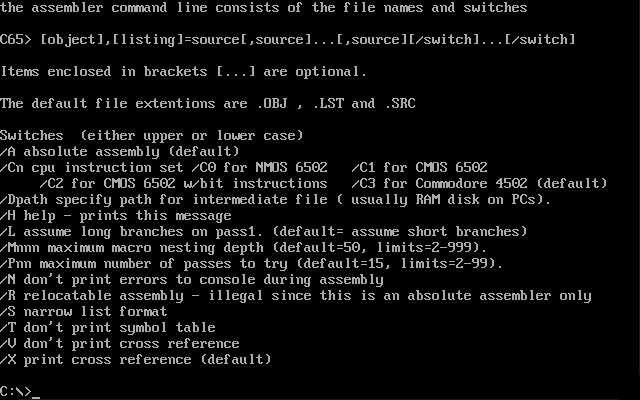 To build the ROMs for their 8-bit computers, Commodore originally used an assembler that ran on their own 6502-based machines (part 2 of the series). From 1984 on, they used the “Boston Systems Office” (BSO) cross-assembler running on VAX/VMS (part 3).

In order to be able to use the new 65CE02 instructions, they had several options:

The “Commodore 6502 Assembler” (6502ASM") is a 6502/65CE02 cross-assembler written in C, written by Bob Norby of Commodore Semiconductor Group (CSG, formerly MOS). It aimed at full compatibility with the “BSO” cross-assembler on VAX (part 3), which Commodore had been using for all their projects before. It was developed on VAX (using VAX C V2.4-026) to allow for easy comparisons of its outputs with BSO’s.

In June 1989, Fred Bowen ported the source to MS-DOS. An Amiga version was mentioned in the 1991 C65 specification, but it is unclear whether the source was ever actually ported to an Amiga C compiler.

The 6502ASM was closely modeled after the BSO assembler, so it used the same command line interface. The user could pass the arguments either as command line options, or type it into a prompt, if no command line arguments were specified:

C65> is the prompt printed by the assembler. It matches the prompt of the BSO assembler, and symbolizes “Cross assembler for 6502” – it has nothing to do with the Commodore C65 project.

This is the help text that is printed if /H is passed:

Details on the usage as well as the supported syntax are described in the unofficial manual.

6502ASM is very similar to the BSO assembler. It supports the same directives, and uses the same syntax for local symbols, conditional assembly and macros.

The only real difference seems to be the lack of the .IF directive, just like with HCD65. .IF seems to have been undocumented on the BSO assembler, which would explain its omission from both HCD65 and 6502ASM. That BSO supported it and treated it as a synonym for .IFN can be seen from its use in the TED KERNAL source.

This version has a few bugs:

Version V1.0 fixes a few bugs, including the ; and LDZ problems.

LST files of the source are included in c65_src.tar.gz. The reconstructed source is available as part of the cbmsrc repository.

I adapted version V1.0 to current compilers so that it builds and runs on modern Unix systems. It is available on GitHub:

.IF has been added and the bug with macros within .INCLUDEs has been fixed. It can currently compile all known Commodore BSO source code, with the exceptions mentioned above. Contributions are welcome!

At the beginning of the C65 project, three different assemblers had been in use at Commodore:

This marks the end of the 5-part series on the assemblers used by Commodore.