I happened to come across 50 original German GEOS 2.0 disks that were broken and sent in for replacement. In the first part, I covered the disks that were broken probably due to user error. Now let’s look at the read errors on the remaining disks. As it turns out, there might be a bug in GEOS that caused the boot disks to break!

On a 1541 disk, every track consists of sectors that are encoded like this:

The SYNC marks are used to find the start of a header and the start of data. The header contains the number of the sector. Before and after the sector data, there are gaps to account for uncertainty in timing when overwriting a sector.

On the GEOS boot disks, SYNC marks are 3 bytes long, and gaps are 8 bytes1. Headers are always 10 bytes, and sector contents are 3252 bytes. About 2% of the end of each track are unused (tail gap).

About 90% of a track is actual sector data. 3% is header data, and 1.5% are SYNC marks. So if a disk degrades through wear and tear, physical damage or demagnetizing, we expect mostly data checksum errors, and a maybe a few header checksum errors and missing SYNC marks. But this is the actual statistic:

The ratio between missing data sync and the checksum errors is about what we expect – but what about the huge number of missing header SYNCs?

In addition, three of the disks that don’t boot fail because of the very same issue: 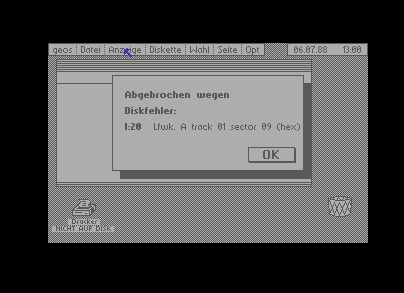 Three of the disks fail in DeskTop when trying to read track 1, sector 9 – because of a missing header SYNC.

A missing header can have different causes:

Track 1 sector 9 is the info sector (the sector that contains the icon and some other metadata) of the joystick driver, which is on the first page of the disk and will be shown by DeskTop after booting – unless the user switched to e.g. using mouse for input, in which case a different input driver would be shown on the first page.

So we have established that sometimes sectors are written too slowly, so they write over the next sector header, making the next sector unreadable. A problem that is not too uncommon with 1541-style disk drives is that the motor speed might be off: Because of the sector gaps, the on-disk format can tolerate a motor that is about 2.5% too slow, and we’re seeing a case of 7-8% here. But let’s first gather more data before jumping to conclusions.

This graph shows that the overwritten headers only ever happen on tracks 1 to 17:

Tracks 1 to 17 have one thing in common: They are speed zone 3. A 1541 disk has three speed zones to account for the different lengths of the tracks:

The fact that the 28/26 ratio matches the measured data perfectly and that the errors only ever happen in speed zone 3 are very strong indications that sometimes, sectors in speed zone 3 get incorrectly written with speed 2.

First, it is important to find out whether this has anything to do with GEOS. Maybe it happens on all 1541 disks, but since no other tasks on a C64 are as disk-bound as running GEOS, the error might not show itself much anywhere else. This is a distribution of missing sector headers errors across about 300 random disks from my collection:

The error is spread evenly, except for the lowest tracks, which are written with a lower density, and track 18, which holds the file directory and therefore usually mostly empty sectors.

So it is not an inherent property of the 1541 hardware or its firmware. It is GEOS-specific.

In order to find out whether it is specific to GEOS boot disks, I would need a large number of GEOS work disks. After all, the boot disks in my collection have been hand-picked to have many errors. I don’t have access to such a collection, but I don’t see why boot disks would be any special, so I am assuming this happens to all disks used with GEOS.

This makes the GEOS 1541 driver the suspect. The driver takes control of the drive and its firmware and uses its own sector read/write and bus communication code. It does reuse some ROM code though for tasks like GCR encoding/decoding.

This is the reverse-engineered GEOS driver code:

The ROM code at $F24B looks up the number of sectors for the track number in A, and as a side effect, returns the speed zone (0-3) in X. The code there is identical on all versions of the 1541, the 1571 and all common clones.

There is one other place that writes to $1C00, the code to move the head (direction in X, number of steps in A):

This is what we know:

This is an unresolved mystery. I would be very grateful for: