The Apple Lisa from 1983 was the first consumer-class computer with a graphical user interface and significantly more advanced than the 1984 Macintosh, which had a similar UI, but a comparatively primitive underlying OS. Here, I present a searchable PDF of the rare “Operating System Reference Manual for the Lisa” (1983), as well as a quick overview of the OS and how it compares to UNIX.

The OS Reference Manual is actually volume 3 of 3 of the Lisa Pascal documentation. As the last page states, the book was typeset on a Lisa and printed on a dot matrix printer. 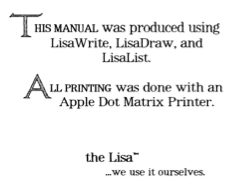 I also converted the typewriter-written draft version from lisa.sunder.net into a searchable PDF:

In its spirit, the Lisa Operating System resembles UNIX a lot, and its features and details were pretty much on par with UNIX systems from that time.

Scheduling: Executable files are statically linked with the Pascal runtime, and they make syscalls into the kernel. The system manages processes (with a single thread of execution) with their own address spaces that are cooperatively scheduled (255 levels of priorities). A syscall or a code segment switch can yield the CPU. Processes are managed in a tree, and the death of a parent will kill its children.

Memory Management: There is no paging, but segmented memory (up to 106 code segments and 16 data segments), and explicit swapping of code and data pages. It is possible to write protect data segments.

Filesystem: The filesystem supports 32 character filenames and allows all ASCII characters except for “-“, which is the path separator. A path can be up to 255 characters; absolute paths start with “-” (processes have a working directory). There are no enforced extensions, but the convention is to use extensions for file types. Volumes can be mounted and unmounted, and accessed at the top level by using their device name or their volume name, if they are mounted. The serial (RS232A/RS323B) and parallel (PARAPORT) ports, stdio (MAINCONSOLE) and /dev/null (BITBKT) are
like character-devices and also accessible at the top level that also provide an ioctl-like interface (DEVICE_CONTROL).

File access goes through open/read/write/close. A file is associated with cdate, mdate, adate, a delete protection flag and an up to 128 character label. Apart from regular files, there are pipes, disk-mapped data segments and event channel files.

For safety, the on-disk data structures are very redundant. Every block contains context data like a size, name, filesize, forward/backward link, inode and position in file. Directories (catalogs) and the “medium descriptor data file” are managed just like regular files.