In the series about the internals of the geoWrite WYSIWYG text editor for the C64, this article discusses how the app manages to extend its usable RAM by 5 KB using a custom screen recovery solution.

Any graphical user interface that allows overlapping items has to deal with the problem of recovery: When dialogs and pull-down menus are shown, they cover parts of the screen, and when they are dismissed, the underlying UI needs to be revealed again.

There are two basic approaches to this:

The latter solution requires additional memory, but is a lot faster and doesn’t create a potentially jarring redraw.

GEOS uses the “restore the pixel data” approach, but with a twist.

This background bitmap is really just another (invisible) framebuffer with the same layout as the actual screen bitmap. When saving pixels, they get copied from the screen (“foreground”) bitmap to the same offset in the background bitmap and vice versa.

These two functions are the core of the API:

While applications are free to use the API this way, the system-suggested way is actually different.

When using the core GEOS API, it’s not actually necessary to save the pixels (ImprintRectangle) before overwriting them. The background buffer already contains a copy!

To calculate the offset in the bitmap of a y coordinate, all internal drawing code calls GetScanLine. This function usually returns two pointers in virtual registers r5 and r6:

Any code in the GEOS drawing library then stores the pixel data in both the locations pointed to by r5 and r6:

For as little as an extra 6 clock cycles for every byte to be stored (which is 8 pixels), the drawing code stores it into both bitmaps, so there is usually no need to copy data from the foreground to the background bitmap.

Now when the system draws a menu or a dialog, it only draws it into the foreground buffer. That’s because the GetScanLine call can actually return different kinds of pointers depending on the global system variable dispBufferOn:

By only setting one of bits 6 and 7, all drawing code can effectively be instructed to only draw to the foreground or the background bitmap. In this case, the two sta instructions will just store the pixel data to the same location twice.

The system default is to draw everything to both bitmaps – except menus and dialogs, which are only ever drawn to the foreground bitmap. There is therefore no need to call ImprintRectangle: All that the built-in code has to do is call RecoverRectangle on the rectangle that it overwrote.

geoWrite is a very complex application that is very tight on memory, so it was designed to reclaim as much as possible of the 8 KB normally used for screen recovery. Text rendering is very slow, so redrawing the page as a recovery strategy is out of the question.

Instead, geoWrite stores the saved pixels more efficiently: The buffer only really needs to be as big as is required for the largest rectangle ever saved while in the app. And for geoWrite, that’s dialogs, which are 200×104 pixels. So that’s 2600 bytes instead of 8000 bytes.

The code to save a screen rectangle is called with the following arguments in virtual registers:

X coordinates have to be divisible by 8, so that the pixels are at byte boundaries.

The following is the main code, slightly edited for readability. It iterates over all lines of the rectangle and, on save, appends the bitmap bytes to the array of saved data. On recover, it does the opposite.

…and the code for copying a byte from the buffer to the screen:

geoWrite uses a table with the buffer pointer, x, y, width and height values for each use case, so only an offset within the table has to be passed:

The first item in the table is for saving and restoring the rectangle under the “geos” menu, and so on.

MEM_SCRREST is the address of the start of the recover buffer. The buffer pointer isn’t always MEM_SCRREST though:

This is because the font menu has a sub-menu for the point size: 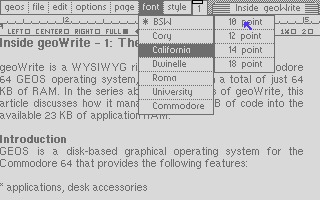 When the font menu is open, the rectangle covered by it is already saved in the buffer. The rectangle under the point size menu has to be saved in the area following the already occupied data.

Here’s a mostly to scale overview of the geoWrite memory map compared to the GEOS default:

geoWrite puts the recovery buffer at the topmost 2600 bytes of the $0400-$8000 window that is available to the application if it doesn’t use the background screen.

The reason for this location is because the range $7900-$7F40 is where GEOS requires the printer driver to be loaded once the application wants to print. It overlaps the background screen on purpose: As long as the application is not printing, so no space for the driver is wasted. And once it is printing, it just can’t use the background buffer any more. The same is true in geoWrite’s model.

Aside from setting dispBufferOn to just the foreground, using one’s own save/recover logic requires the app to make sure the save and recover code gets called at the right times.

For dialogs, this is easy: Apps have to explicitly show them by calling the doDlgBox API, so before calling it, geoWrite saves the respective rectangle, and once the API returns, it recovers it.

For menus, it’s more tricky. The application has to trigger on the open event of a sub-menu.

Usually, the data structure of a menu for the doMenu API contains pointers to sub-menu data structures, forming the complete menu tree, like this:

This way, an application can describe a complete menu tree with just data structures and no code.

In this example, whenever the “geos” item is clicked, the callbackGeos function is called, which saves the rectangle that will be covered by the “geos” sub-menu, and returns a pointer to the sub-menu to be presented (edited for clarity):

For the recovery of the rectangle, there is actually a GEOS system variable supporting this use case: If the application sets the RecoverVector pointer to anything but 0, closing a menu will call that code instead of doing its own RecoverRectangle-based recovery.

This is where it points in geoWrite (again edited for clarity):

The function reuses the previously set offset in the screen recovery table (in virtual register a2L) for buffer location, the origin and size of the rectangle.

Berkeley Softworks wrote the GEOS operating system as well as many major applications like geoWrite, geoPaint, geoPublish and geoCalc, yet they implemented two different methods for screen recovery: The system way of doing it wastes space, but is very simple to use. And the way they do it in the applications is very much tied to the specific use case, but very optimized.

1 thought on “Inside geoWrite – 2: Screen Recovery”