In the series about the internals of the geoWrite WYSIWYG text editor for the C64, this article discusses what was required for the German localization.

Localizing an app doesn’t mean just translating all text. Language is just one part of it. Here are all concepts that require changes to geoWrite:

Let’s go through them.

Translating the app is not as easy as just translating all strings.

First, let’s look at what must not be translated:

These are magic filenames that contain the current clipboard/pasteboard contents. Translating them would break interoperability between apps in different languages.

Then, there are strings where it is up to debate whether they should be translated: geoWrite supports three keywords that get replaced with dynamic contents when used in a page header or footer:

For the German version, these keywords were in fact translated: DATUM, ZEIT, SEITE.

From the strings that should be translated, let’s start with the straightforward ones: Here is a table of strings that is used in menus:

Care has to be taken that the translated version fits the available space: The translations of “edit” and “options” were abbreviated (“Edit”/“Editieren”, “Opt”/“Optionen”), because the whole menu bar would have been too wide otherwise:

For submenus, GEOS programmers have to explicitly state the location and size in pixels, so the definition of a submenu has to change as well: 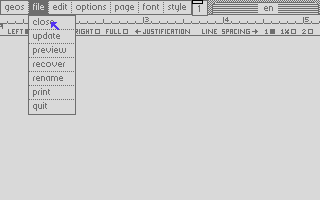 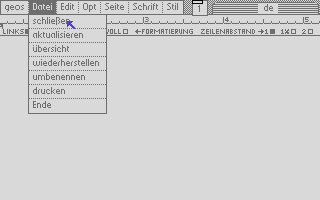 The German version is wider, so the value for the right border of the menu was updated.

In the case of dialogs, the translated text might not fit into the same number of lines and might require a re-layout: 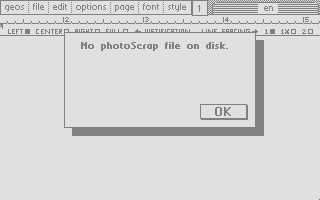 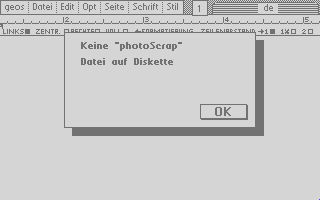 So while the English version just consists of one line of text, the German version adds a GOTOXY control code to move the cursor to the second line:

Because of word order differences, the startup dialog needed a complete redesign… 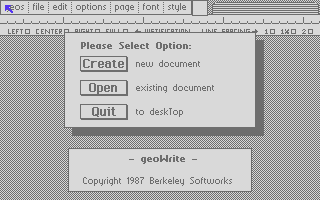 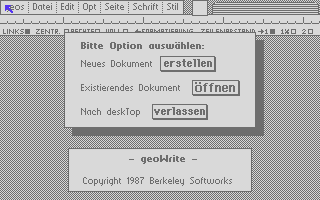 …which required changing the locations of all text and icons in the dialog’s definition: 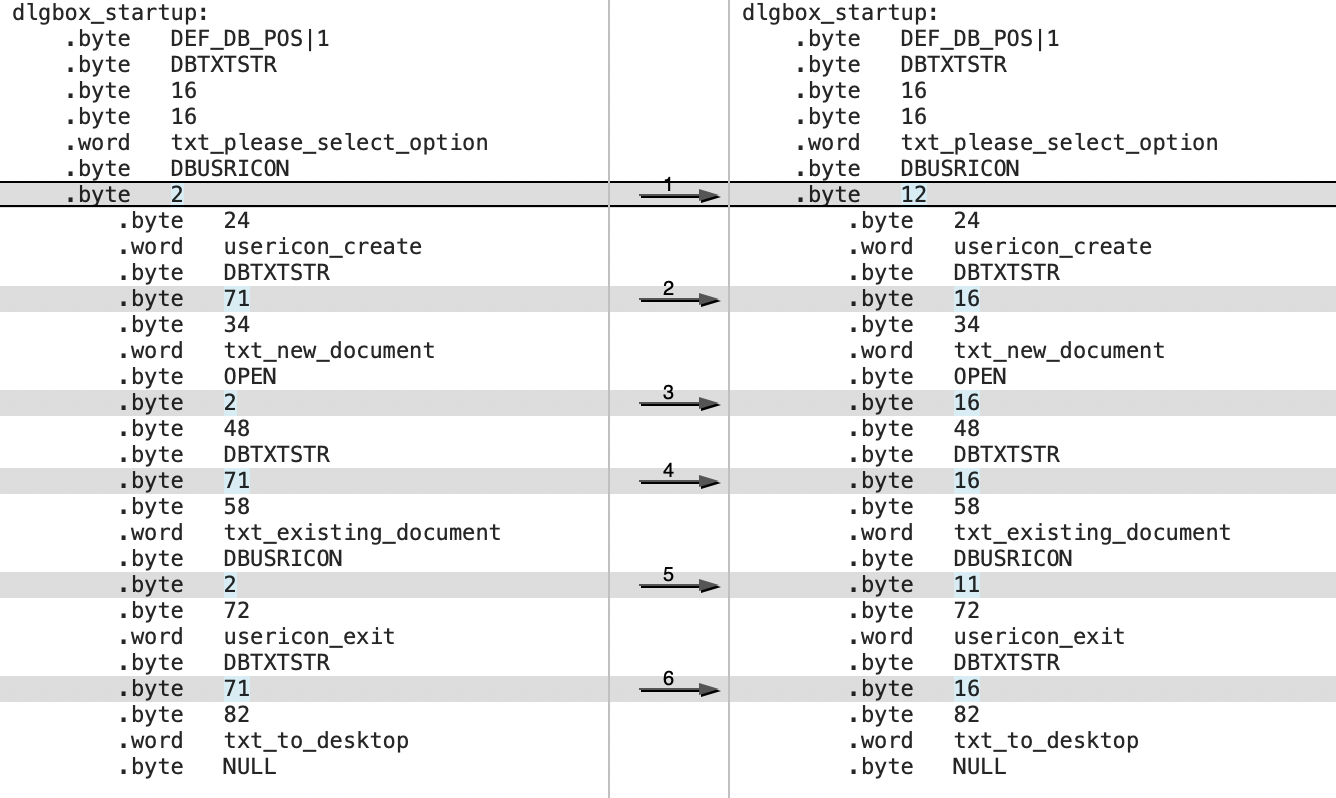 The startup dialog contains buttons that say “Create”, “Open” and “Quit”. GEOS only provides a limited set of predefined buttons (“OK”, “Cancel”, “Open”, …), so the pixel images of “Create” and “Quit” are supplied by the app and need to be translated as well.

The translated words are longer, so the buttons have to be bigger as well.

As discussed in part 1 of this series, GEOS uses a custom system to save and recover screen contents that get overwritten by menus and dialogs. Since the sizes and positions of the menus are different, the rectangles that need to be recovered are changed in their table as well: 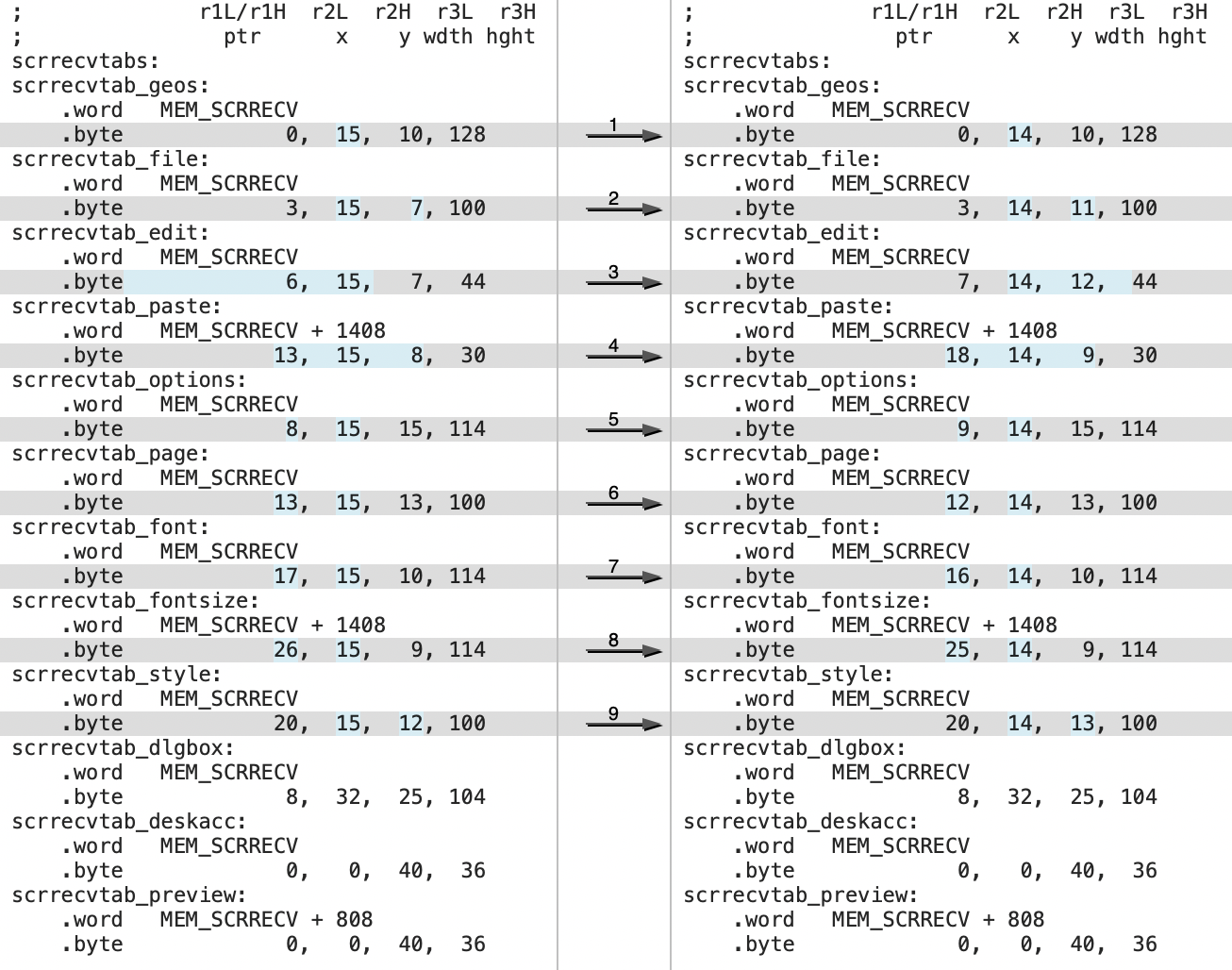 Different cultures/languages use different conventions for the date and time format. The DATE and TIME keywords stamp the current date and time into a page’s header or footer. For the English version, it uses the US format for dates and times:

For the German version, it uses the German format, with German month names:

This is the core function to create the date string:

The month and day are reversed in the two different formats. The “.” vs. the “,” after the day gets handled by the function getDay:

The function to create the time string has some extra logic to convert the hour (0-23) to the range (1-12):

And at the end, there is extra code in the US version to add “AM” or “PM”:

Until the advent of Unicode, operating systems used different character encodings for different languages or scripts.

The English version of GEOS uses the 7 bit ASCII encoding, which contains the 26 letters A through Z, but no umlauts. The GEOS KERNAL has no context of a character encoding, it just blindly draws glyphs that are stored at an index in a font – as long as the index is between 32 and 127, the 7-bit ASCII printable range. The only difference between the English and the German operating system in terms of character encoding are the fonts: Just like the regular fonts, the fonts that come with the German version have 96 characters, but some characters have been replaced by the extra umlauts and the ‘§’ character (important for legal documents). These are the variants of the system font “BSW/9”:

geoWrite doesn’t generally have to care about the encoding either: With the German font set, any version of geoWrite will display German umlauts.

There are two cases where it does have to care though: searching and printing.

The function to search text has the option of searching for whole words only. For this, geoWrite needs to know which code points are letters or numbers. In English, that’s A through Z and 0 through 9. In German, this must include the umlauts. This is the function that decides on what’s an alphanumeric character:

The default is for geoWrite to print pixel images of the pages of a document. But there is also ASCII mode, which sends the plain text to the printer, so the printer can use its built-in fonts. In this mode, the English GEOS sends ASCII-encoded text, that is, its internal representation without any conversion, to the printer driver. If the printer uses a different encoding, the driver has to do the conversion.

German GEOS can’t just send the codes for “§ÄÖÜäöüß” – they would print as “@[]{|}~”. It has to convert them, so that printer drivers can be universal and independent of the system’s language.

This is the code that does the conversion – it is missing from the English version:

The eight character codes in German GEOS that differ from ASCII (line @from) are converted to eight codes above 127 (line @to).

The destination encoding is Codepage 437, the standard (and now obsolete) encoding used by the IBM PC and MS-DOS. That is, except for ‘§’, whose CP437 equivalent would be $15, which is a non-printable character in ASCII-based encodings.

The authors of GEOS were free to choose any encoding – it’s really just a convention between applications and the printer drivers. But with CP437, drivers for PC printers of the time can just pipe the data through as is.

Modern software usually comes as a single application binary that supports multiple languages, and with support from the operating system can use different conventions for date/time and numbers, and uses Unicode to express and work with any character in any script.

geoWrite is running on a 64 KB system and doesn’t have the luxury of spending code for any of these features – all localization differences are compile-time options. This means that in a multi-lingual environment, there are many limitations:

Then again, it would be possible to architect a version of geoWrite with more flexibility:

The latter point would of course waste space on disk (regular geoWrite is 35 KB, a 1541 disk holds 165 KB) and increase load times of VLIR records.

1 thought on “Inside geoWrite – 6: Localization”