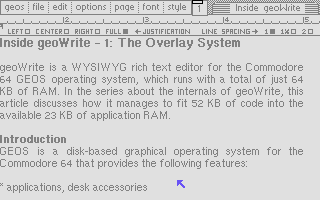 6 thoughts on “Inside geoWrite – 1: The Overlay System”