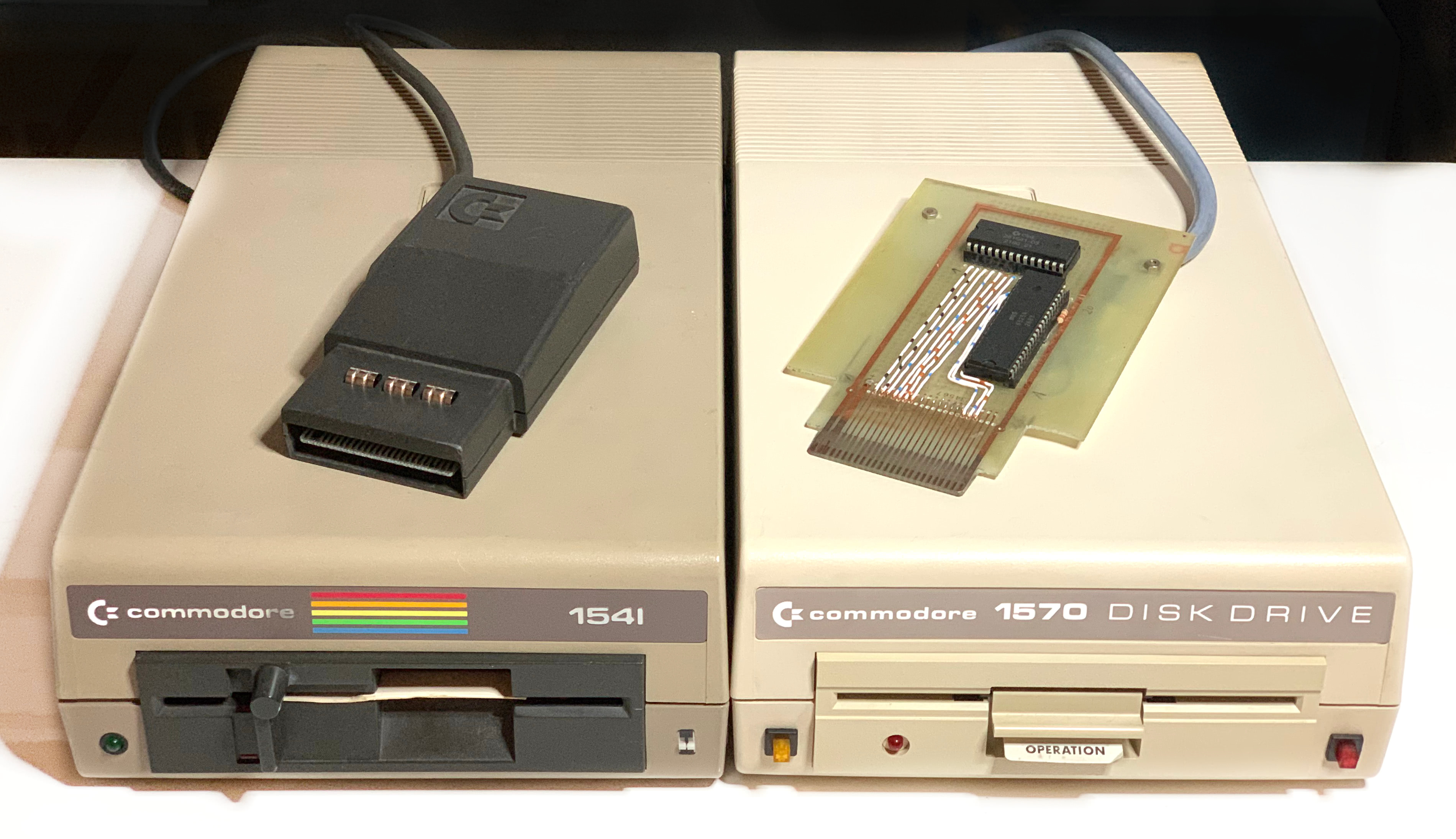 The first Commodore disk drives for the PET were using the industry-standard parallel IEEE-488 bus. For cost reasons, Commodore switched to a custom serial version of the bus with the VIC-20 and the C64. But serial was slow, and IEEE-488 was expensive. TCBM was supposed to be the compromise. There was no connector on the drive side, and the computer side was a cartridge (“paddle”) with the I/O chip – which was shipped with the drive instead of the computer, to keep the cost of the computer low. 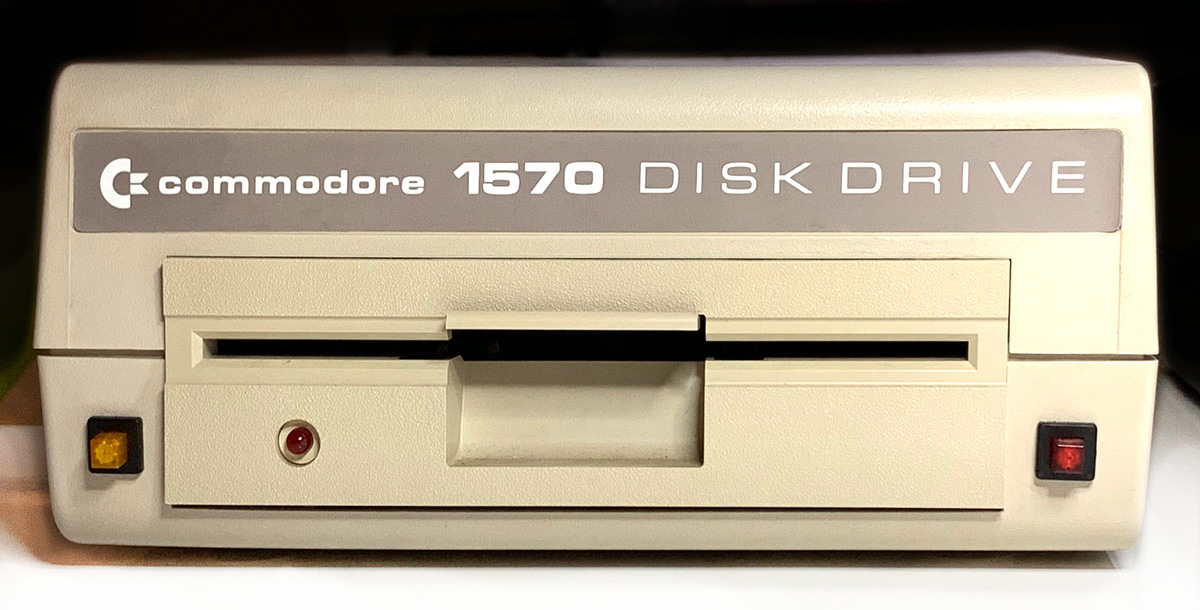 The 1570 has the power LED converted into a reset button with a power LED, and on the right, there is an added device 8/9 toggle button with an LED indicating the current device number. 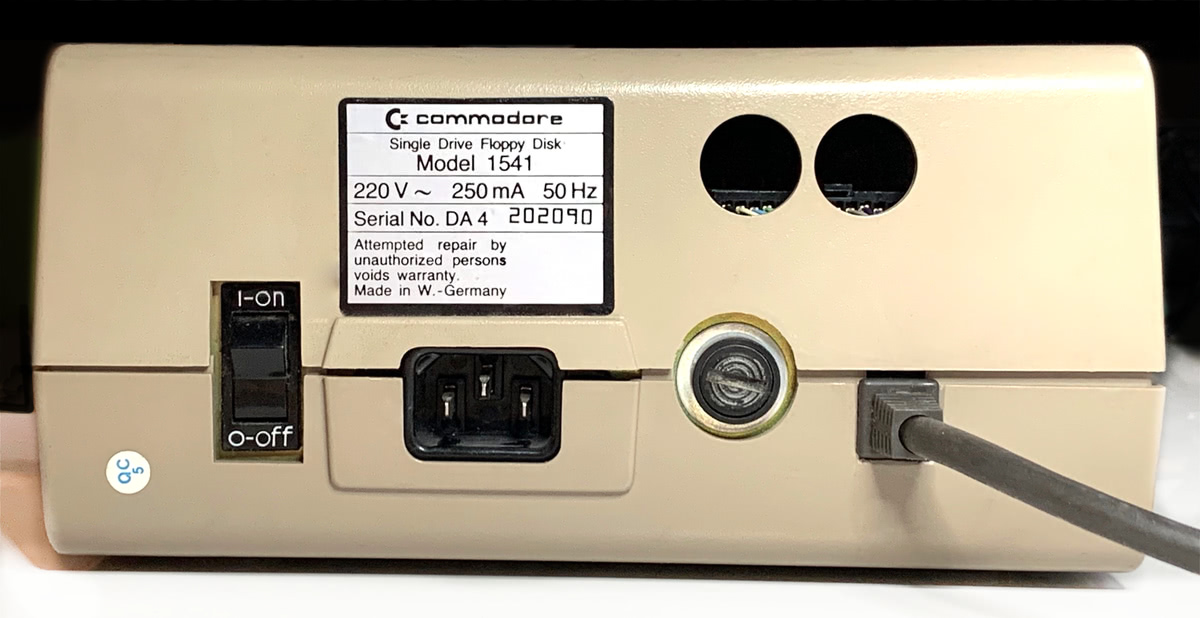 On the back, the 1541 has two holes where the serial ports were, and the added 1551 paddle cable. 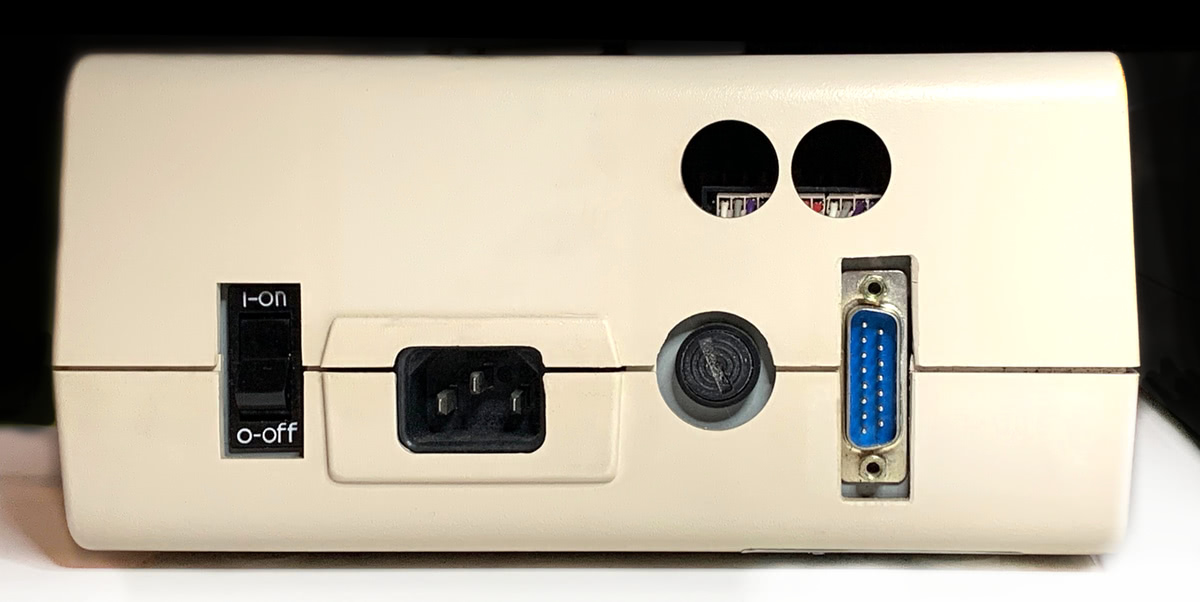 The 1570 also has empty holes, but it uses a DB15 connector for the paddle. 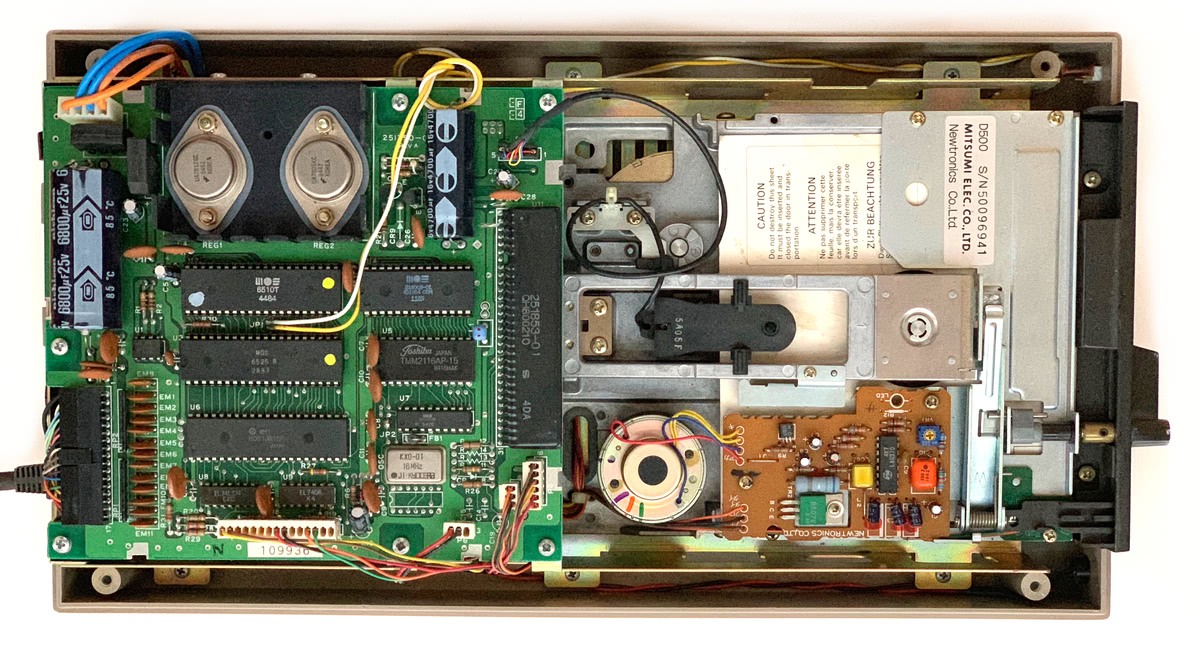 The mechanics of the 1541 are unchanged, but the board has been replaced with a 1551 board. 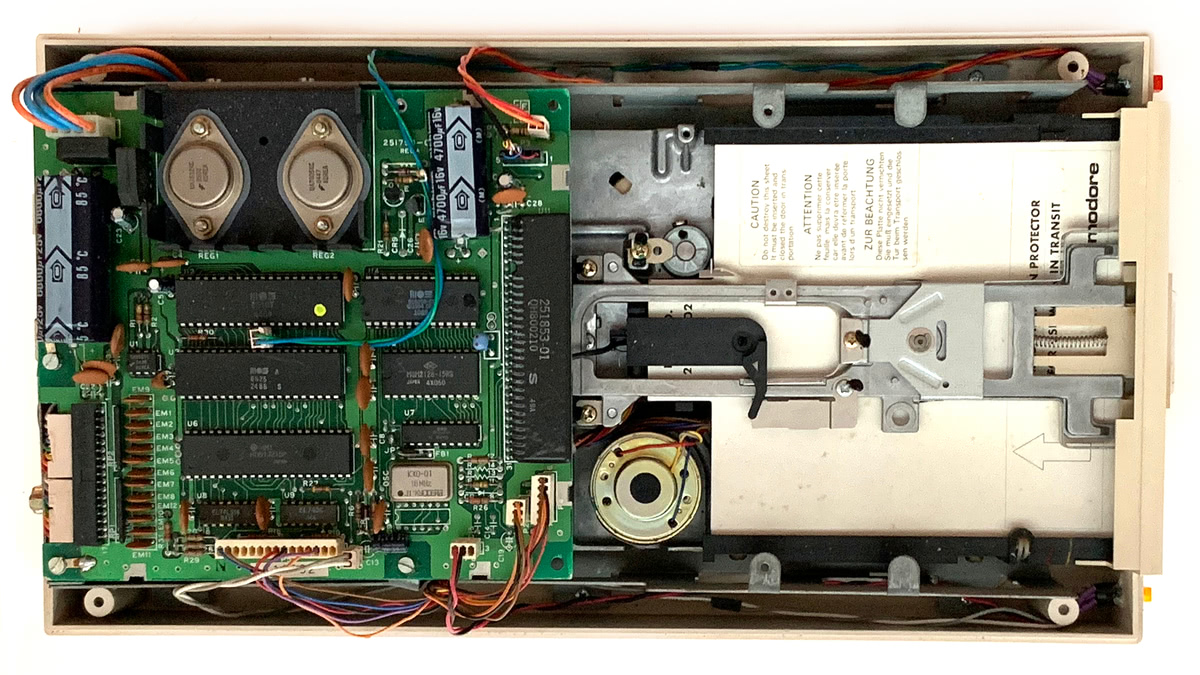 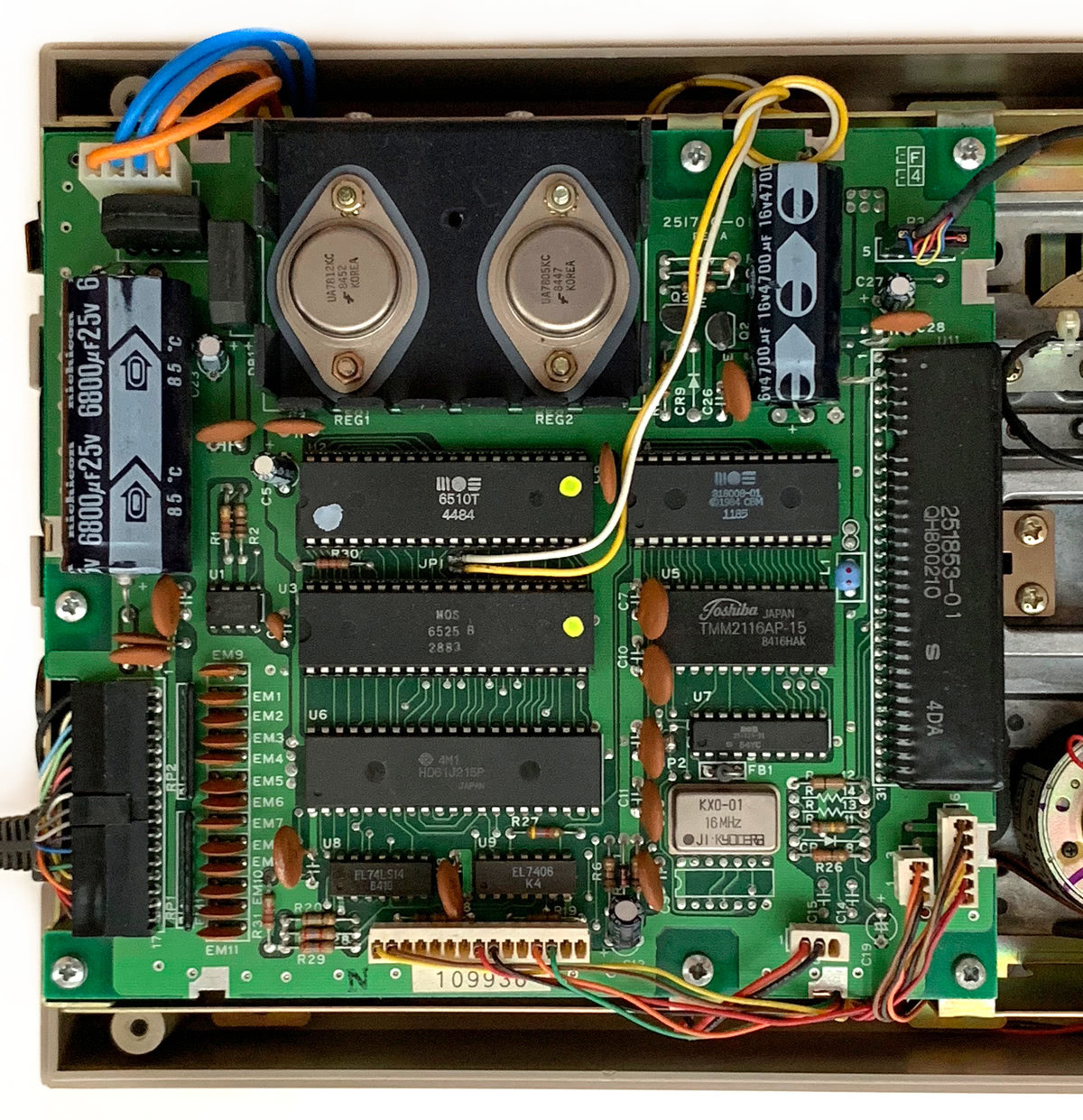 The top left connector is power. The four white connectors at the bottom and the black connector at the top lead to the drive mechanics and are just compatible between the 1541 and the 1551. The black cable on the left goes to the paddle.

A standard 1551 does not have a switch to change the device number. Cutting the trace at JP1 would switch it from 8 to 9. Here, the trace is cut, and the yellow/white wires lead to the switch at the front. 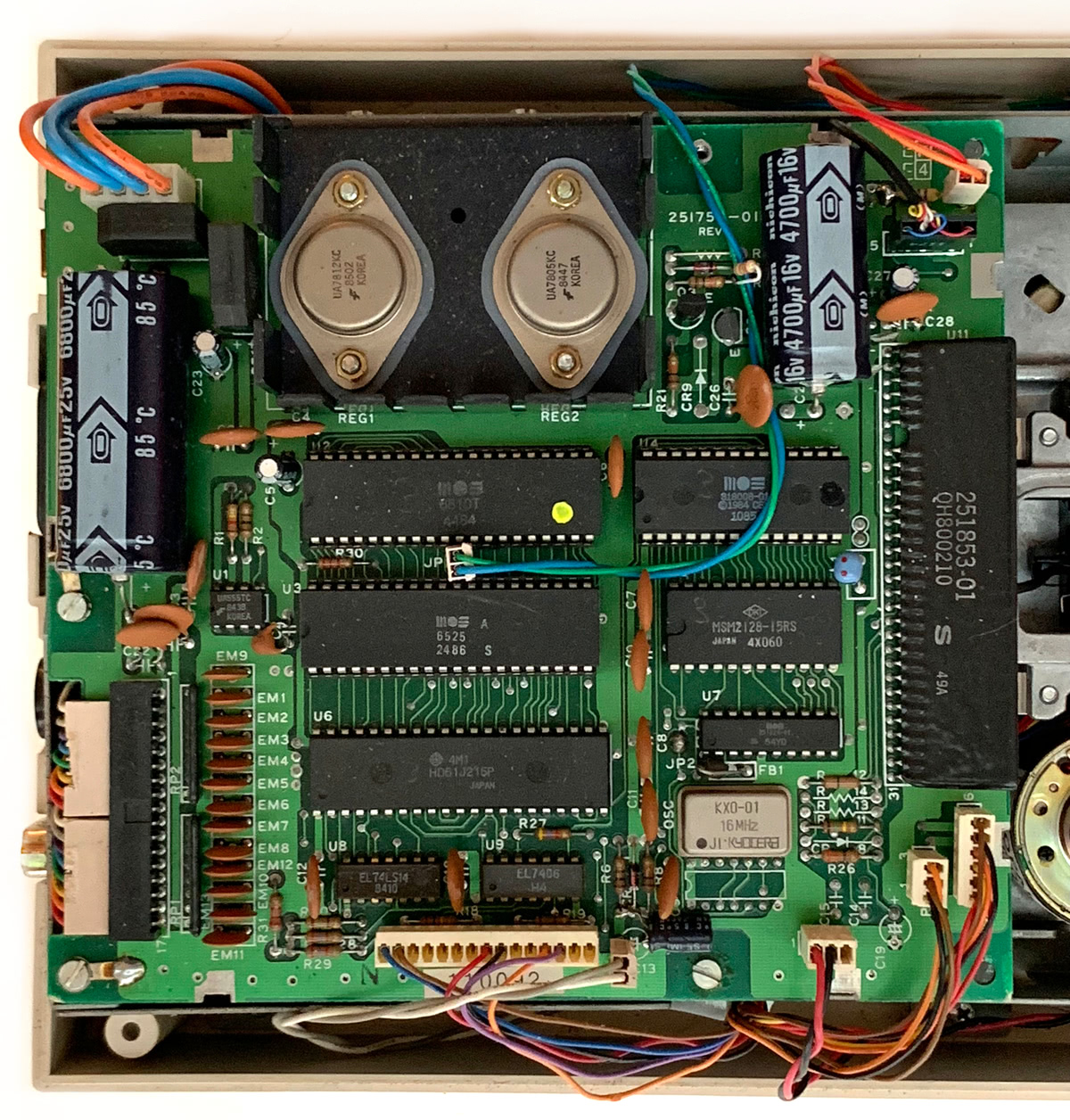 Things look similar in the 1570. JP1 is cut and connected here as well (blue/green) and goes to the toggle switch on the right of the front panel. But there are two more connectors: the orange/red one at the top right (drive number LED), and the white/gray one at the bottom center (reset button). 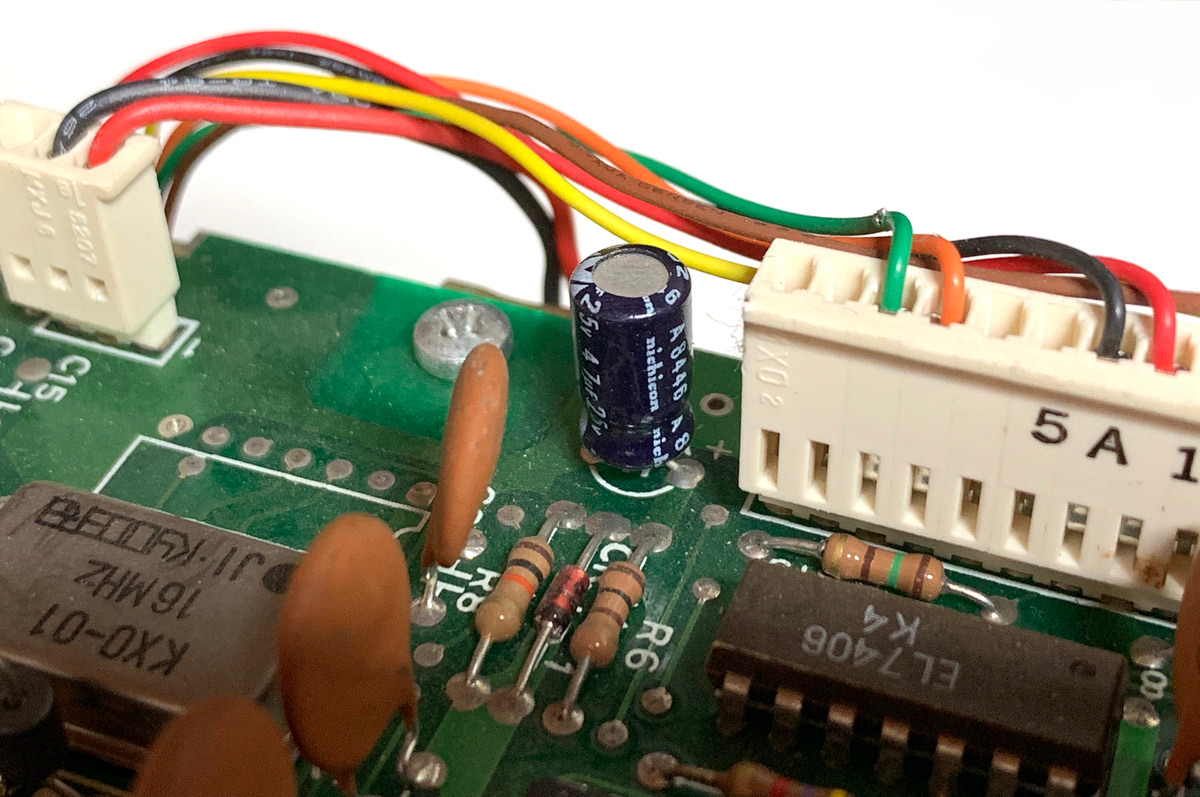 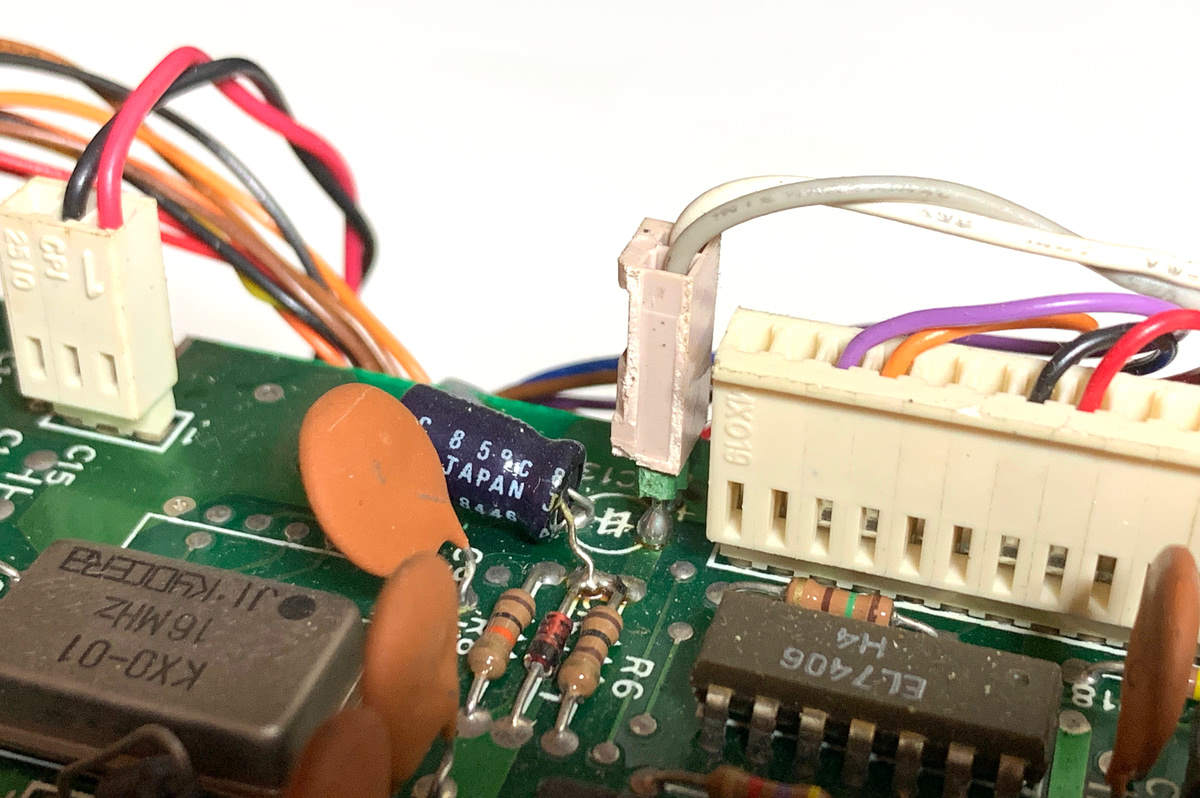 These pictures compare the unmodified board with the modified one. The white/gray wires move the capacitor C13 and add a header that leads to the button on the left of the front panel. Pressing the button causes a reset. 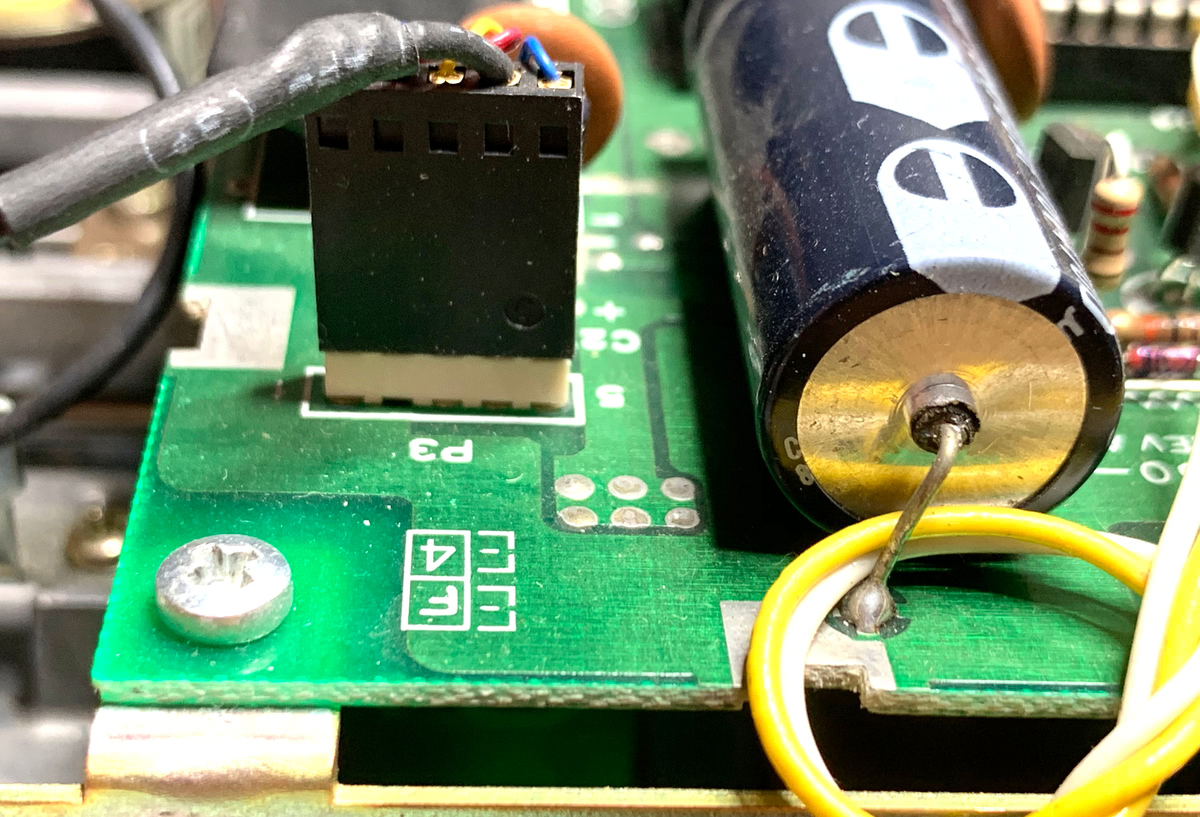 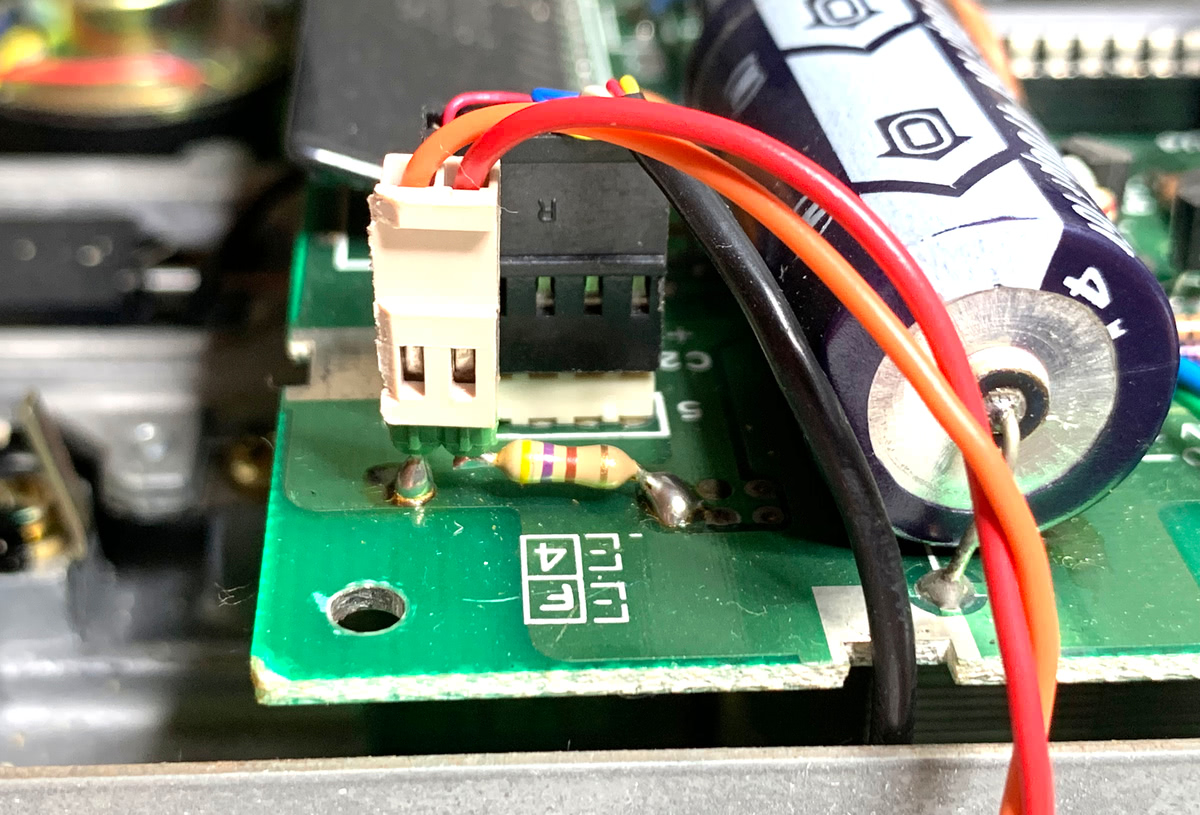 The newly added orange/red wires connect to the LED on the right of the front panel. The LED will show whether the device number is 8 or 9. 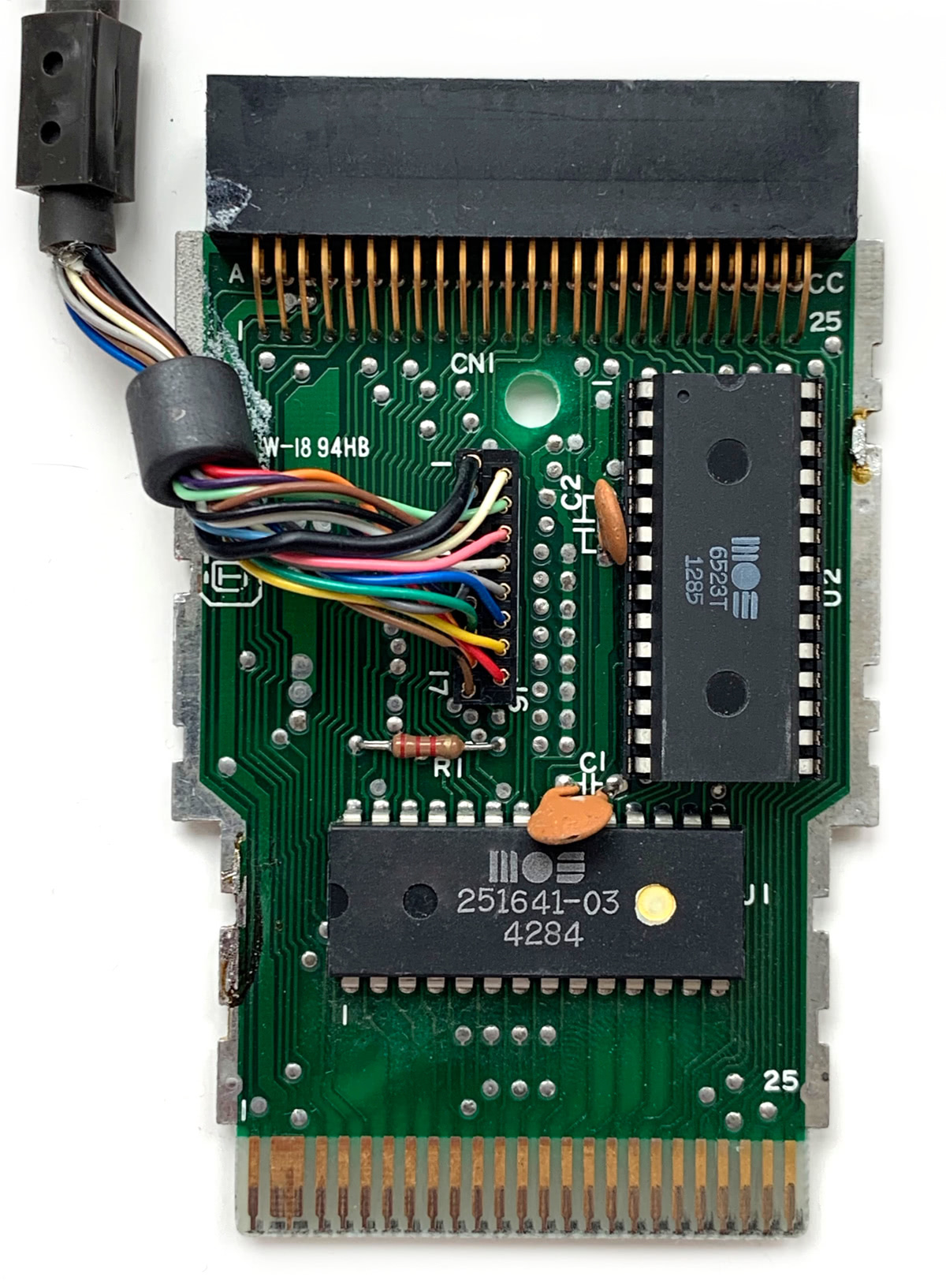 The PLA is the address decoder to map the TIA to either $FEC0 or $FEE0 in the computer’s address space. In case the PLA breaks, it can be replaced by a PLAdvanced or a SuperPLA V4. 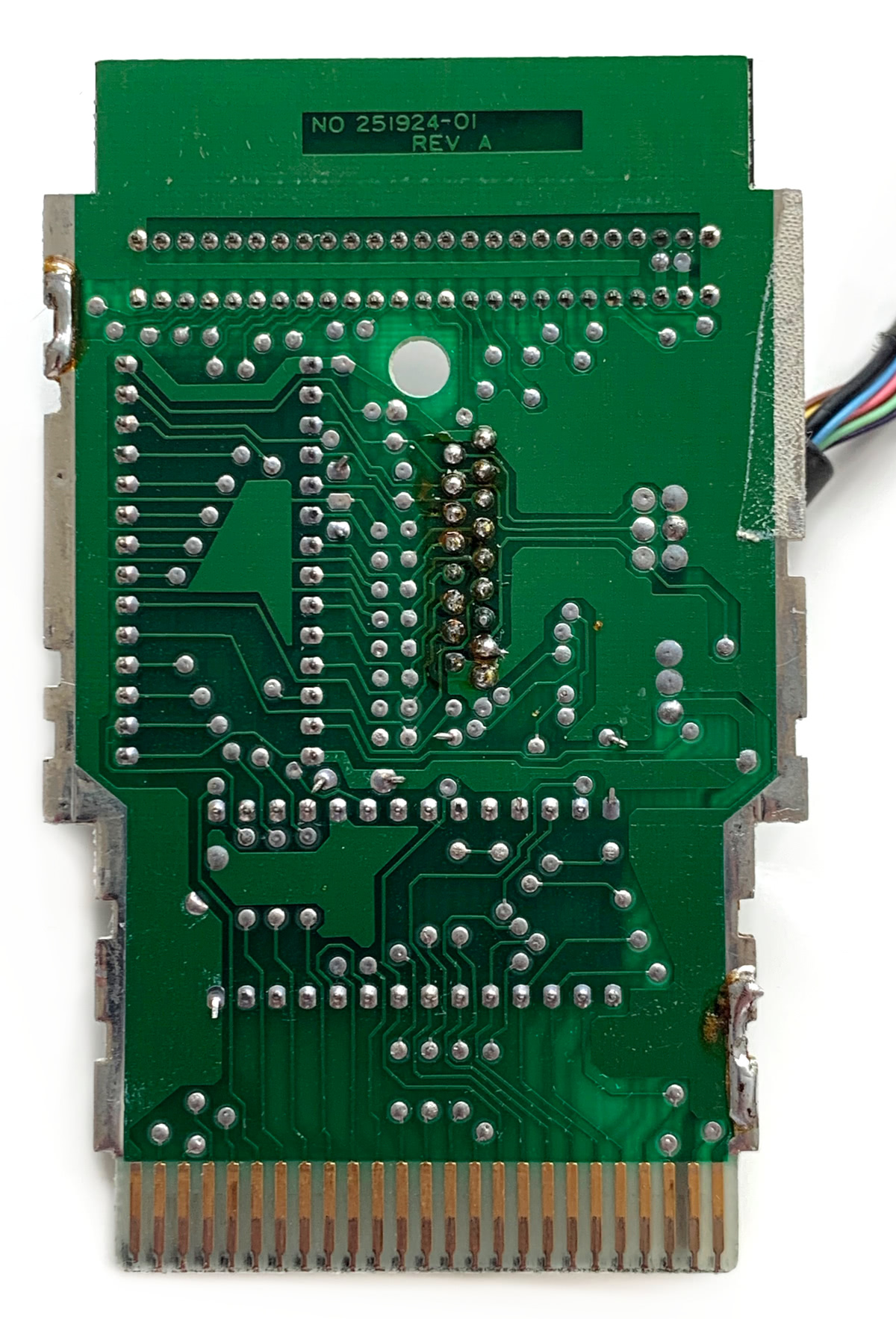 This is the back of the paddle. 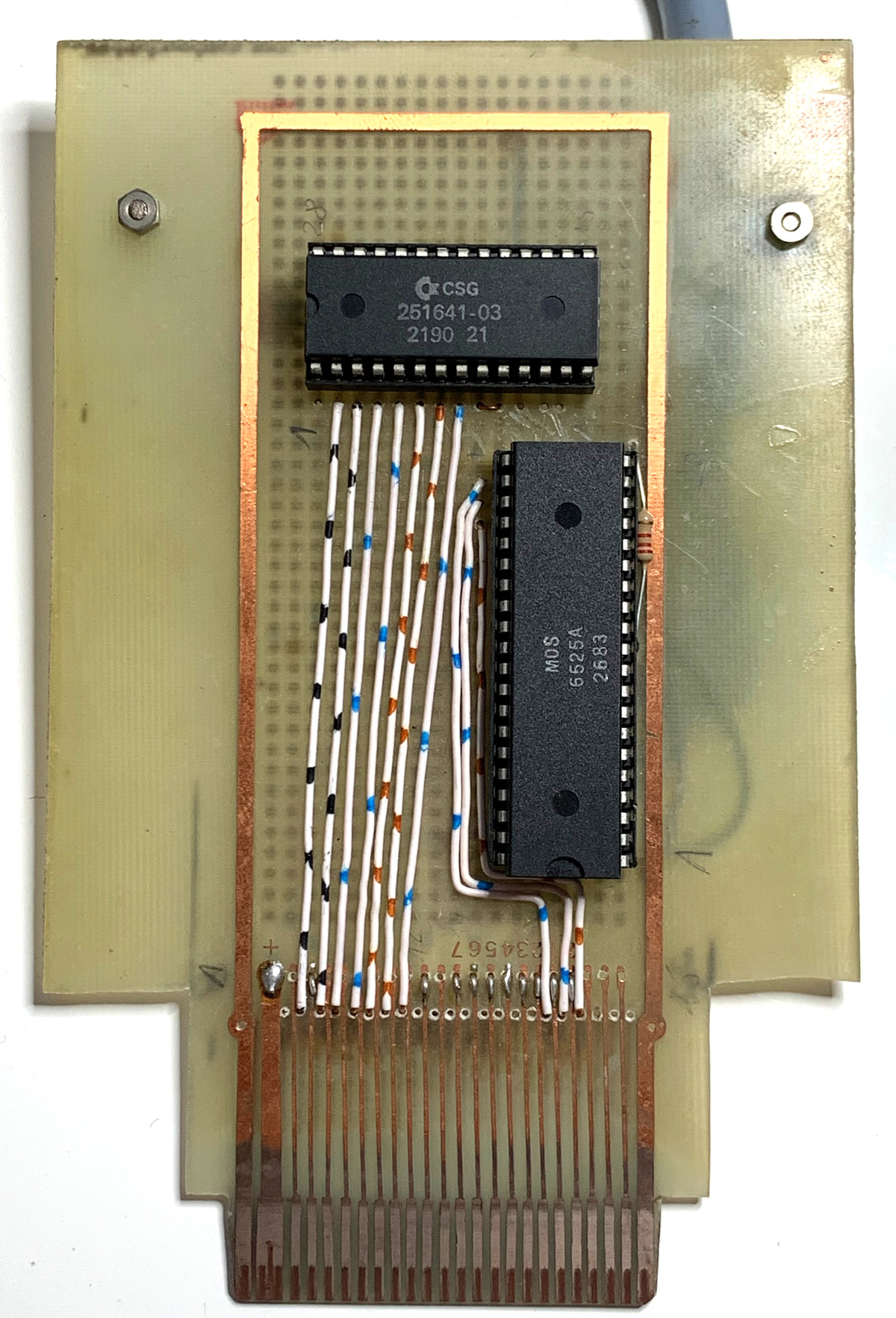 The modded 1570 came with a hand-built paddle. It uses an original 251641-03 PLA with a date code of 2190. 1990 is very late for a chip that was only used in disk drives dicontinued not long after 1985. Commodore may have been producing it as a replacement part for quite a while1.

The TPI is the DIP-40 6525 described earlier. The extra pins are just not connected. The 6523T was probably not available as a replacement part from Commodore. 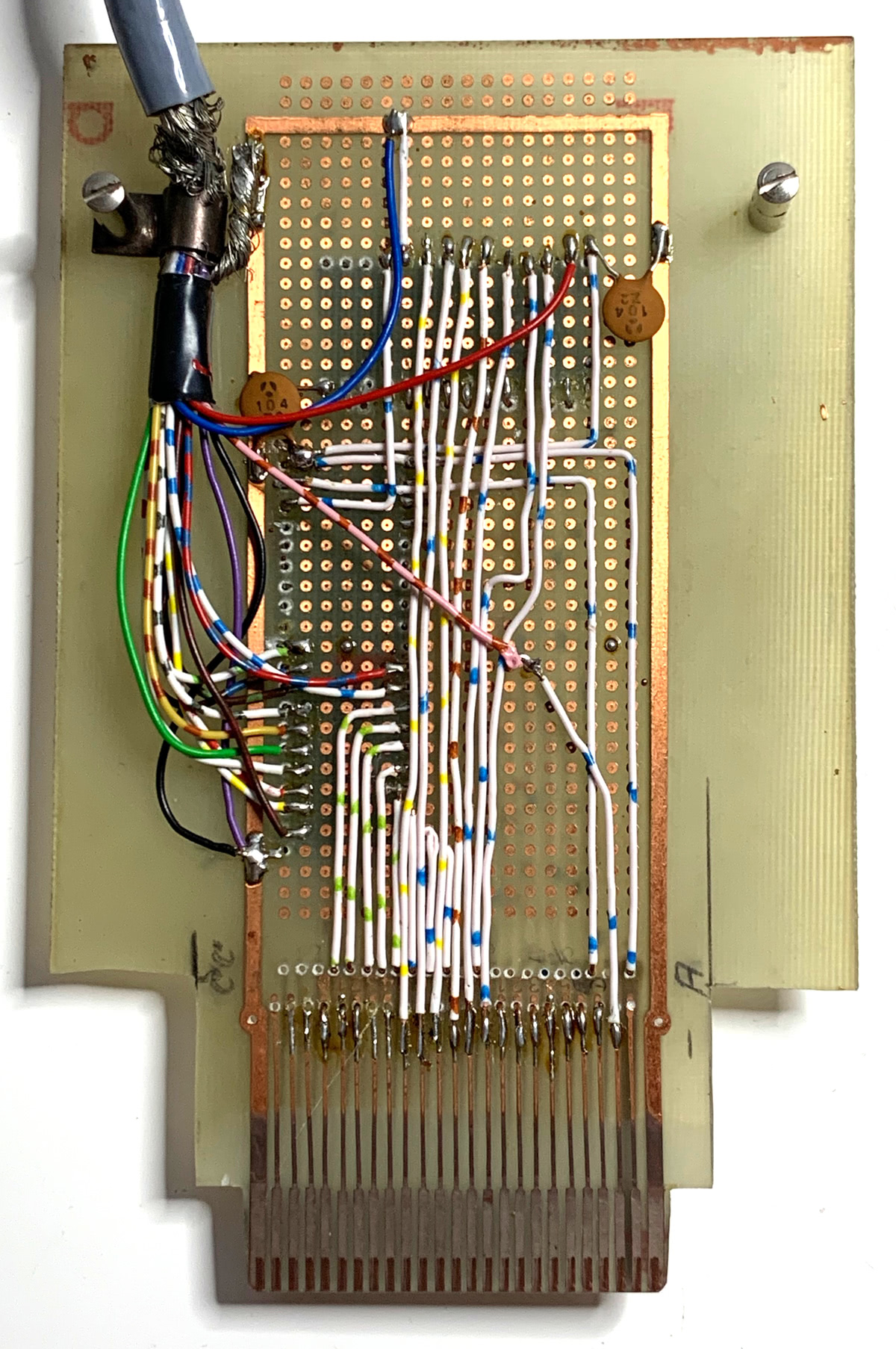 And here is the back of the hand-built paddle. The schematics are pretty simple. The original schematics exist, as well as a newer reverse-engineered version. 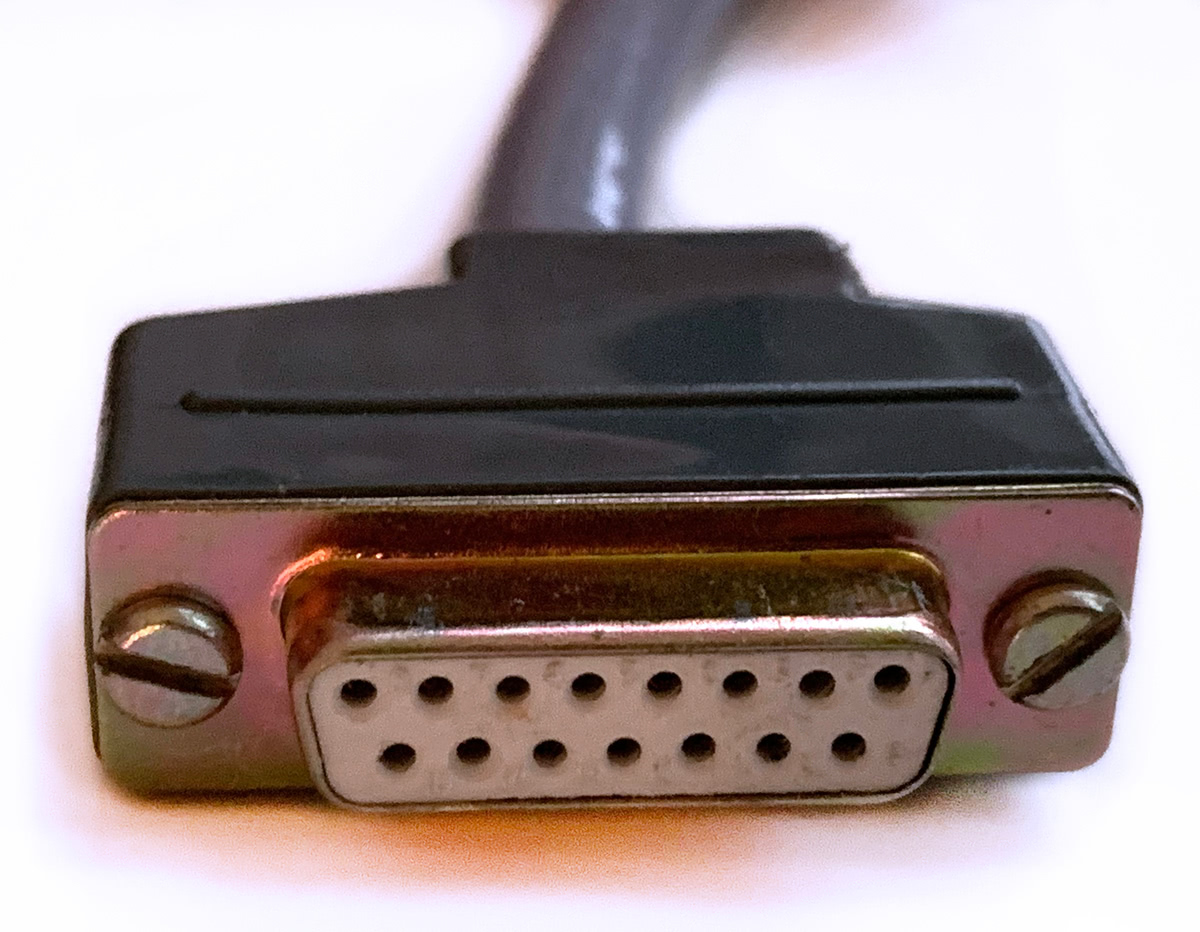 This is the DB15 connector used to connect the paddle to the drive.

The modded 1541 was most likely created by combining a 1551 that had dead mechanics with a 1541 that possibly had a dead board.

The 1570’s reset switch in the power LED and the 8/9 switch with an LED indicator are great modifications. It would be interesting to understand how they work using the schematics, and write instructions for modding other 1551-like devices like this.